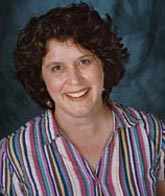 Heidi, writing under her nom de plume Anna Castle, described herself as "a Texan, a tree-hugger, a bookworm, a dog person, a Trekkie, a history buff, a knitter, and a gardener."

She was born in Lawrence, Kansas on June 27, 1956, but moved soon after to Houston, Texas, where she grew up and became a Texan. Inquisitive by nature, Heidi was a creative explorer from a young age. As a child, she spent summers traveling with her family to Indigenous communities throughout Central America and the United States.

Heidi was an avid reader and had a great appreciation for libraries. Her brother Jay taught her how to read at the age of four while she was recovering from a long illness. After years of visiting the library with her father on Saturday mornings, Heidi came to consider libraries as her second home. In her author biography, she remembers fondly the "wonderful librarian in the children’s room in the Houston Public Library [who] taught me to use the card catalog. (Thank you, whoever you are!) Soon I had read all the books about dragons and was working my way through the collections of fairy tales.” As an adult, she was an aficionado of Lord of the Rings, Star Trek, and Buffy the Vampire Slayer.

As a child, she loved animals and cared for them everywhere she went. As an adult she was passionate about rescuing dogs, planting trees, native landscaping, and nature conservancy. Heidi had many hobbies. She was excellent with plants and was an active organic gardener. She took great pleasure in creating a comfortable home with a native inspired landscape.

Among her many talents as a youth, she had a facility for language and music that her parents encouraged. The Johnsons spent a year in Bergen, Norway during Heidi’s senior year in high school. According to her mother, “We just put the kids in a Norwegian school and told them to speak Norwegian, and Heidi did exceptionally well." While there, she took on the role of unofficial visiting scholar when teachers brought her to classes to speak to classmates about life in Texas. Heidi was also an accomplished harpist in her youth. She pursued her study of the instrument at Colorado College, but after her Freshman year, she decided that a professional career in music wasn’t her calling.

Heidi moved to Austin in 1976 to attend the University of Texas at Austin. While at UT, she earned a Department of State Fellowship to travel to Tunisia in 1977. She graduated with a degree in Ancient Greek with Special Honors in 1979. Though she spent much of the Eighties helping to "Keep Austin Weird," she left to pursue a Masters in Computer Science at the University of Denver in the late 1980s. After earning her MS in 1991, she moved back to Austin where she jumped head first into the burgeoning world of computer languages as a software engineer at Tivoli Systems, Inc, a local Austin start-up. That career was short-lived, however, and her lust for learning and languages propelled her into the graduate program in linguistics at the University of Texas at Austin.

Heidi traveled to Mexico as a Fulbright scholar during the academic year 1995-1996 to conduct research on a Zoquean language spoken in San Miguel Chimalapa, Oaxaca, Mexico. Her dissertation, A Grammar of San Miguel Chimalapa Zoque, is a comprehensive description and analysis of this language, which belongs to the Mixe-Zoque language family that is widespread through Central and Southern Mexico. Of her work, Anthony C. Woodbury, Ph.D., her graduate advisor and long-time friend, said “Her brilliant grammar is a thoughtful and detailed treatment of a language that played a central role in the development of agriculture and complex societies." Her dissertation made a significant contribution to research on the Zoquean language family and earned an honorable mention from the Society for the Study of the Indigenous Languages of the Americas for the Mary R. Haas Book Award in 2001. She earned her PhD in linguistics from the University of Texas at Austin in 2000.

After graduating, she accepted a brief stint teaching linguistics at Ball State University in Muncie, Indiana from 2000 to 2001. But Texas was calling her back.

She returned to her beloved city of Austin in 2001 to serve as the first project manager of the then newly-formed digital Archive of the Indigenous Languages of Latin America (AILLA). The joint project of the College of Liberal Arts and the University of Texas Libraries at the University of Texas at Austin stores and preserves multimedia language materials in and about Indigenous languages spoken throughout Latin America. During her tenure at AILLA from 2001 to 2012, she built AILLA into the internationally recognized language repository that it is today.

As part of her work at AILLA, she was instrumental in establishing world-wide standards for the then-emerging field of language documentation archiving, and was a founding board member and the second president of the Digital Endangered Languages and Musics Archives Network (DELAMAN), a international network of digital archives dedicated to preserving languages and cultures under pressure. According to her collaborator Helen Aristar-Dry, "Heidi was a force of nature—her delightful talks did so much to publicize language documentation in the early years; and her untiring work for AILLA produced a lasting legacy." She spread the word about language archiving and its best practices, not only among fellow archivists, but to a much wider range of stakeholders, including Indigenous communities working to preserve and use records of their heritage languages, and linguists assisting in such efforts.

After retiring from AILLA in 2012, her love of words took her in a new direction. Heidi launched an award-winning, successful writing career that centered around her love for historical mysteries. Her friends in the writing community and her fans knew her by her pen name Anna Castle.

As an independent author, Heidi/Anna published seventeen mystery novels across four series, her most popular being the Francis Bacon Mysteries, as well as a compendium of short stories, and a romance novel. Heidi/Anna was a productive writer, always engaged in some aspect of production or publishing. Her latest novel in the Francis Bacon series, Lock up Honesty, was published just ten days before she died, and the fifth in the Professor and Mrs. Moriarty series was in process at the time of her death. As reflected in her tagline, she wrote with "heart and wit,” which was evident from her entertaining perspective on the charismatic Francis Bacon to her humorous portrayal of a young cunning woman in the Sixteenth century. About her own writing, Heidi/Anna said, "Every book is a new world, even the next in a mystery series. New characters, new aspects of the setting. Historical fiction is ideal for us learning junkies."

Heidi/Anna was not only a writer, but an advocate of non-traditional publishing and a passionate mentor to aspiring indie authors. She was an integral member in the Sisters in Crime Heart of Texas Chapter in Austin and the Indie Author Society group of local authors. With her vast experience in writing, marketing, and publishing, she was an enthusiastic educator for all aspiring mystery fiction writers.

She served on the Sisters in Crime Guppy Chapter Steering Committee and was an indispensable part of marketing outreach and the production of two Guppy anthologies, Fishy Business and The Fish that Got Away. Kathy Gresham, president of Sisters in Crime Heart of Texas Chapter, remembers Anna as "a mentor to many and a great friend…She was the hardest working, most giving author I have ever met. She will be sorely, deeply missed.”

In the Indie Author Society group of local authors, she organized events, moderated group discussions, and taught classes on writing and publishing in her spare time. Mat Herron, founder and member of the IAS, remembers Anna Castle as “a brilliant historical fiction writer and a pillar of the indie publishing community…[She] was vibrant, sassy, outspoken and committed to her craft. We loved her and will miss her dearly."

Heidi was a loving daughter and sister and an enthusiastic and supportive friend and colleague. She will be missed by all whose lives she touched.

In lieu of flowers, please consider making a donation to one of the following causes that Heidi supported:

3. Send the check by mail to: University Development Office The University of Texas at Austin P.O. Box 7458 Austin, Texas 78713